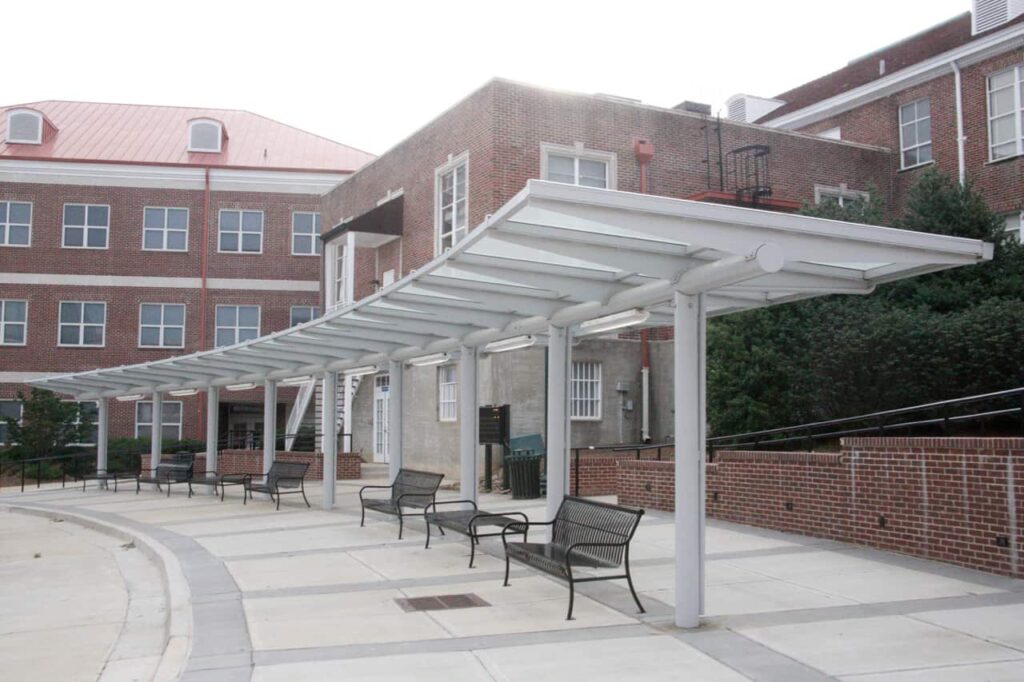 Dating back to 1939, the Kennon Observatory at the University of Mississippi in Oxford is a campus focal point. Its grounds also include a bus transit hub for Ole Miss, with some 2,000 – 4,000 students, faculty and visitors passing through every day. Until 2016, they were served by a single small bus shelter.

That changed in 2016 when Duo-Gard collaborated with a team from Cooke Douglass Farr Lemons Architects + Engineers in Jackson to accommodate bus passengers with two striking curved canopies.

Located side by side, the canopies measure 11’x92’ and 11’x61, and their curvature reflects the transit loop area. The canopies were designed, of course, to provide protection for bus passengers traveling four routes on campus. Yet the design rationale goes deeper, says team leader Clark H. Wells, landscape architect Project Manager and Associate ASLA.

“Certainly we wanted the bus structures to protect students, but we also wanted them to blend in with existing campus architecture, which has a historic uniform look of brick and metal,” says Wells. “We wanted the structures to disappear, and they are the first buildings like this at Ole Miss.”

Wells achieved the desired “disappearing act” by glazing the roofs with glass. “They fade into the sky,” he says, “becoming less obtrusive than other options, and so the structures don’t detract from the site’s visual appeal.”

Duo-Gard engineered the architect’s custom design with half-inch-thick glass, which includes a vandal-resistant film. Duo-Gard also provided steel columns and structure from its in-house fabrication facility. Each of the glass glazing panels is 5’x10’ and weighs 350 pounds, supported by spider clips.

“Adding to a campus that’s existed since 1848 and is historic for many reasons poses challenges, yet our close collaboration with the architect produced a unique outcome,” says Justin Watts, Duo-Gard project manager.

“Everybody is happy with the finished product,” says architect Wells.